This article from the Farmers Journal features Croom Concrete installing a box culvert for a cattle underpass in 48 hours.

What’s the quickest you could dig up a public road, build a cattle underpass and then re-surface and re-open the road? I’m not sure if it’s the record but two days sounds fast to me.

This job was done on the R551, near Ballyduff, Co Kerry, for dairy farmer Johnny O’Hanlon, over a weekend. He farms with his parents Ann and Gerard.

His problem was that the block of land across the road is needed for grazing. But with cow numbers increasing, crossing over and back was a headache. The underpass was ‘opened’ in early April and now the cows are coming in and going back out more or less by themselves. Johnny organised planning permission himself. The box culverts were supplied and installed by Croom Concrete of Co Limerick

Saturday morning and digging out of the approach routes starts, on both sides of the road. Croom Concrete expected bed rock and therefore brought two excavators on site, one to work a rock breaker, the other to drag the spoils back. As it turned out, no bedrock was encountered, only pencil shale at the bottom of the excavation and this did not require the rock breaker. The road remains open to traffic while this work id going on.

The Croom team has dug out the approaches and spent an hour on Saturday afternoon looking for the water mains and fibre optic cables are supposed to be on the same side of the road at a depth of three feet. Eventually, the eight-inch water mainsis found on one side, at five feet. The fibre optic cables are on the other side and this complicates the digging up of the road section. 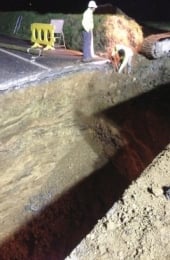 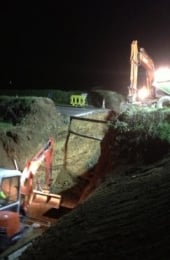 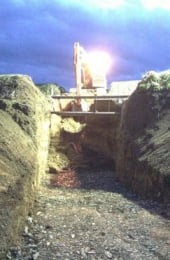 9pm: The road is closed

Work starts on the final part of this excavation. The water mains is supported from above by a wooden ESB pole. The digging continues until 5am at which point it stops due to rain.

Sunday morning: The tunnel space has been cleared beneath the main water pipe and the fibre optic tables. The fibre optic tables are supported by ropes tied to a wooden pole. As the water mains was deeper than expected, the floor of the excavation has had to be dug deeper than planned — it’s now 18 feet below the road surface. Thankfully, there’s no problem with water table and no bedrock. Next, Croom Concrete prepare the floor here by rolling in eight inches of hardcore topped by four inches of quarry dust. The final surface must be smooth and set to the right slope. A hole is dug at one end for a small sump to take any rainwater out of the underpass.

The Croom concrete lorry brings lean-mix for backfilling at the sides of the tunnel. It is more costly than hardcore but Kerry County Council required it to guarantee no subsidence. Next to come on site will be the box culverts. The first box is being lowered into place. Each box weighs 12.5 tonnes. Internally, they are 2.1m (6’10”) high and 3m (9’10”) wide. Each is 2m long. The units have tongue and grooved ends and, once the base is level, they will fit together closely and can be sealed against moisture.

A wing wall end unit is being lowered into place. There is also a similar end unit on the other side of the tunnel. Overhead L-shaped precast walls have been placed at both sides. These are designed to withstand the impact of a traffic accident. The use of precast structures saves time and labour on site. Both the wing wall units and walls were newly designed this year by Croom Concrete. Lean mix concrete is placed over the top of the culvert up to within a few inches of road level, leaving space for the final coat of tarmacadam.

Dusk on day two and the sun sinks as the structure of the underground tunnel is finished. The soil banks are battoned back and are ready for seeding with grass. The road is re-opened to traffic with a temporary surface. It will be closed for an hour on Monday morning — after commuter traffic has passed – to get a coat of tarmacadam. Two days later and the cows go through the tunnel for the first time.