This article, taken from the Farmers Journal outlines the design and installation process used by Croom Concrete for a slurry storage tank for John Hanrahan in Granagh.

Last week I met up with Joe Costello of Croom Concrete and we went to see some sheds that he had been involved with at time of construction. The Limerick firm began making slats some 30 years ago and gradually widened its range of precast products to include beams, passage slabs, wall blocks, culverts, etc.

But Croom now also shutter and pour under-ground tanks which is somewhat unusual for a precast company. The company was started by Matt Costello and is now run by his sons Joe and Mike. Joe is an engineer and has a passion for farm buildings, and slats in particular. We looked at a number of sheds with interesting tanks. The extension to the dairy cubicle house shed featured this week, is on the farm of John Hanrahan, of Granagh – the extension has seven underground tanks. John is another man with passion –in his case, good food.

He is one of the founding directors of the Truly Irish brand of sausages, rashers and related products. He has pig units, of course, but it was his dairy shed I wanted to see. John farms with his brother Seamus and their father Fanahan.

This is the extension added on by John Hanrahan to increase his accommodation and slurry storage. We can see the round roof of the original cubicle house in the background. The extension added 60 cubicle spaces – the Hanrahans plan to further expand the 200 cow dairy herd.

However, the extension added far more to the yards slurry storage. Its seven underground tanks have a total capacity of 2.7m litres (almost 600,000 gallons).

John used his experience of pig housing when designing this shed. The tanks are 10ft deep. The centre feed passage is suspended over a 15ft 6” wide tank. There are three 9ft 6” wide tanks on the left, carrying two rows of cubicles, and three similar tanks on the right hand side, again carrying two rows of cubicles. Utilising all the floor area of a shed for underground tanks is a cost effective way to get plenty of additional storage.

The design work on this shed was done by agricultural engineer Shay Galvin of Croom. This was taken when the slats were being laid. Each tank is 9ft 6” wide and covered with 10ft 6” slats. To the right of the picture we can see the pre-stressed slabs which carry the suspended passage. 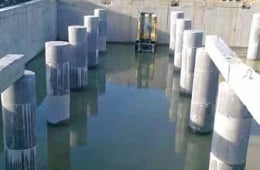 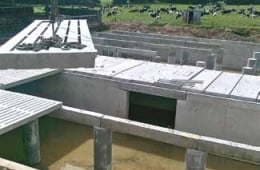 The The Installation Process

The slabs under a suspended passage must be able to safely carry great weight: big loaders and full diet feeders. To give this strength, the reinforcing steel in the slabs is pre-stressed. That means the steel reinforcing cage is put under tension – a pull – while the concrete is poured around it. The tension is released only after the concrete has set. This gives a greater strength than would apply if the metal was not under tension when the concrete was poured. As we can see the slabs are also Hollowcore. This reduces the weight of the slab itself, increasing the weight it can bear. Because less concrete is required costs are kept down.

The slabs for the centre passage are 16ft 6” by 4ft. Clearly it is vital they sit securely on the side walls. To give plenty of bearing the side walls are 20” wide. Once the slabs are laid, the passage floor is built over them. First a layer of reinforcing mesh is laid on the slabs. Then a 6” layer of concrete is poured on top. The mesh acts to spread out the weight of machinery, etc, reducing the loading acting directly under a wheel, etc.

While the slabs are 16ft 6”, they support a passage over 17ft. When the slabs are laid there is a gap of up to 6” between the end of the slab and the end of the adjacent slats. This gap is filled with concrete and this seals the open channels at the ends of the slabs. This is necessary to prevent slurry entering into the inner core of the slab which would corrode and damage it. The shed uprights also fit in this gap on the 20” wall. We can also see that the extension fits well on to the older, existing shed. The centre feed passage is the same width. 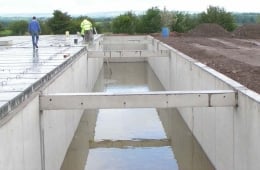 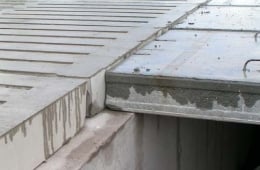 The cubicle beds in this shed were precast and lowered into position on the slats. The slats are seven-rib as against six-rib, Joe pointed out. Instead of having five slots these have six slots per a gang. The result is a narrower 35mm gap between ribs which is kinder on the feet of young stock.

But for the same gang size there is also more gap area. The gap in a six rib slat is typically 40mm. This shed is airy. There is vented side sheeting. The roof has spaced Tegral fibre cement sheeting. Joining an A-shaped roof to a round roof is a compromise. The job was done well here. The metal work on this shed was put up by Michael Hannon Engineering of Kilfinney, Adare.

Joe Costello pointed out that a suspended passage gives cost effective additional slurry storage. “To make it into a tank all you have to add are the two small end walls and a floor. “The side walls are already in place for the adjacent tanks. It’s going to be slabbed anyway – putting on a suspended floor is not a huge extra cost. 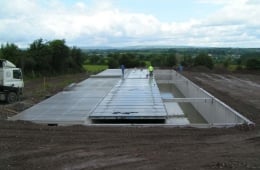 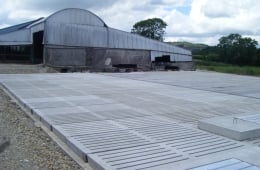 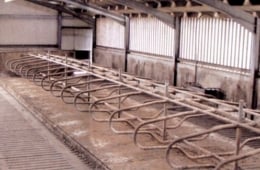 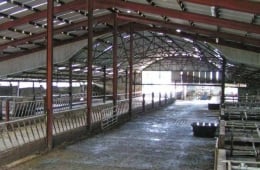 View our products used on this project:

For more information on Croom Concrete products contact our team at croomconcrete.co.uk.